The Story of Cocktail Shakers

Long before there was the Boston, the French or the cobbler, the cocktail shaker had been invented in South America. Fragments of gourd with traces of alcohol in them have been identified as being for the purpose of mixing drinks as early as 7000 BCE.

Egyptians as long ago as 3500 BCE added spices to their fermented grain concoctions before serving to make them more palatable. By 1520 CE, explorer Hernando Cortez wrote back to Spain of frothy cacao mixtures prepared in a “golden cylinder-shaped container.”

By the mid-19th century, the cocktail shaker as we now know it was in wide use, invented by an innkeeper who, while using two containers to pour drinks back and forth between, noticed that one container's mouth was smaller than the other's and held the two together and shook them "for a bit of a show".

The New York Times credits George Foster with the first description of the modern shaker, written in 1848: “With his shirt sleeves rolled up, and his face in a fiery glow [he] seems to be pulling long ribbons of julep out of a tin cup.” But, since all-metal cocktail shakers were standard bar equipment by the mid-1850s, they probably came about somewhat earlier than that.

The new style caught on quickly, both in bars and for home cocktailers: who wouldn’t be more excited to try their hand at mixing when doing so no longer required throwing liquid around your house? Cocktail books seized upon this moment to popularize the simplified technique. By the time he published his seminal 1862 “How To Mix Drinks,” Jerry Thomas was already instructing his readers simply to shake drinks, stating, “Every well ordered bar has a tin egg-nogg ‘shaker,’ which is a great aid in mixing.”

Rapid design advancement occurred during the late 19th century, with several patent improvements occurring during the 1870s and 1880s, including the addition of integral strainer mechanisms to shakers. From this wide world of inventors and bartenders, three types of shaker would stand the test of time, evolving from the original concept: the French, the Boston and the cobbler shaker.

By the dawn of the 20th century, the cocktail shaker had not only solidified its position as bar necessity, it had evolved into three distinct styles. When the concept of the shaker developed in the United States, what was later called the Boston shaker dominated American bars, while the version that rose to popularity in Britain was called the French shaker — later the Parisian. A third type of shaker, the three-part combination or cobbler shaker, came later, and involved an integrated strainer.

The first modern cocktail shakers, likely introduced in the 1840s, were early forms of the now standard Boston shaker: a tin cup used in combination with a glass to mix drinks. In the U.S., even as other shaker designs came and went, this one stayed popular. “He pressed the shaker on with proper caution and shook the double cone of tin and glass with the energy of a machine,” describes Tom Hall in his 1899 book, “Tales,” poetically. “He held the mixing glass high aloft and let the bubbling contents fall four feet into the waiting tumbler, an amber cataract.” The common name, Boston shaker, doesn’t show up until well into the 20th century.

But in Europe, the glass was forgone within a few decades in favor of a two-part tin construction known as the French or Parisian shaker. The first hard evidence of its coming into common use is an 1878 catalogue from Rogers, Smith & Co. owned by David Wondrich (author of “Imbibe”), which features it. The aesthetics of the simple, urn-shaped tool appealed — and still do — to European bartenders, but never gained favor in America, where the nuisance of the added step of straining negated the elegance.

Throughout the decades, inventors and bartenders filed patent after patent in an effort to improve upon the cocktail shaker, but only Edward Hauck’s 1884 version actually stuck. The “shaker for mixing drinks” patent acknowledges previous, two-part shakers, but cites as its improvement the built-in strainer and a little top. The shaker took its name from the sherry cobbler, which Harry Johnson described just two years earlier in his “Bartenders’ Manual” as, “Without doubt the most popular beverage in the country, with ladies as well as with gentlemen. It is a very refreshing drink for old and young.”

While the three types of shakers developed and claimed their place on the bar long before Prohibition, the evolution of the shaker continued with smaller tweaks and improvements. While early versions were made of tin, sometimes nickel-plated, or — for high society — sterling silver, the final significant change came about with the invention of stainless steel. In the 1920s, it became the preferred material for all three shakers and stays that way through today, when all are still in use in forms not very different from their original invention almost two hundred years ago. 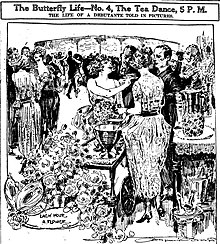 During the 1920s prohibition era in the United States, cocktail shakers were produced in many different shapes and designs, including shakers that looked like penguins, zeppelins, lighthouses and airplanes. Cocktail shaker skills and drink rituals became as important in the Jazz Age lifestyle as knowing the latest dance step. It was after prohibition however, that cocktail shakers really reached their zenith of popularity. They appeared in movies, and were associated with the glamorous lives of movie stars. Cocktail shakers became de rigueur symbols of sophistication and symbols of the good life.

In 1941, the era of the cocktail shaker faltered seriously, as the United States entered World War II and all non-essential uses of metal were redirected towards the war effort. The same companies and equipment formerly used to manufacture cocktail shakers were used to make artillery shells and other war materials. 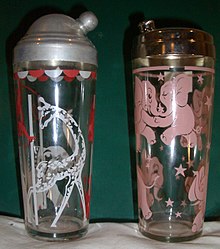 In the early 1950s cocktail shakers enjoyed a brief resurgence as soldiers familiar with them returned and became part of the housing boom featuring "rec rooms" with bars. By the later part of the decade though, shakers were quickly giving way to modern electric appliances that either added a mixing unit to the shaker's lid or did away with the shaker entirely, with the introduction of the electric blender.

The Three Types of Shakers

This one is the traditional cocktail shake and consists of a two-piece body. This one comprises of a 28 imp fl oz metal bottom along with a 16 imp fl oz mixing glass. The mixing container is normally fixed over the bottom and shaken with the ingredients inside. 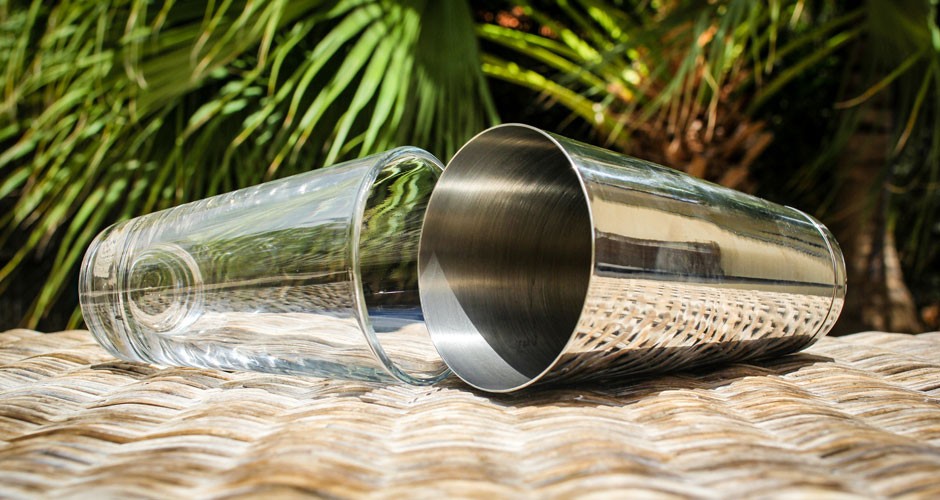 This type of shaker requires the use of a strainer. Mostly, people use the Julep or Hawthrone strainer to remove residue from the shaker (especially if ice is used).

The French shaker is a little like the Boston shaker. This one has a metal bottom along with a metal cap to support the drink. The ingredients are mixed and usually placed with a strainer for removing the residue. 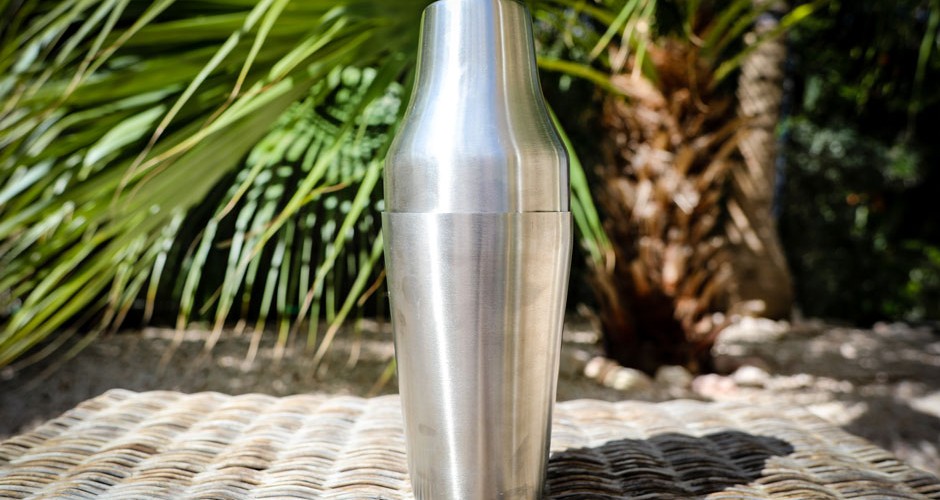 This one is a three-piece cocktail shaker with a bottom, a top and a strainer that is attached to the cap. Ideal for beginners, the cobbler shaker can be used to mix drink and directly pour it in the glass for serving. 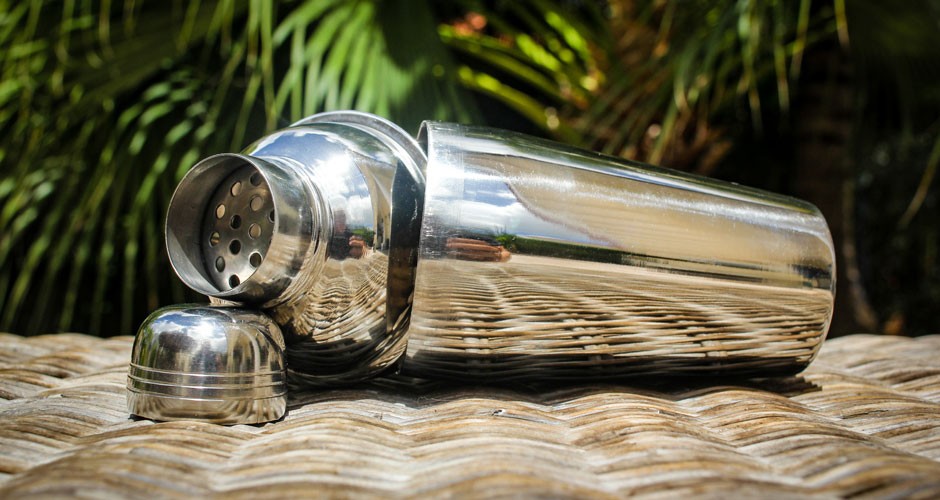