The Story of Jeans

The term "jean" also refers to a sturdy cloth commonly made with a cotton warp and wool weft (i.e., "Virginia cloth"). Jean cloth can be entirely cotton as well, similar to denim. Originally designed for miners, modern jeans were popularized as casual wear by Marlon Brando and James Dean in their 1950s films, particularly The Wild One and Rebel Without a Cause, leading to the fabric becoming a symbol of rebellion among teenagers. Nowadays, they are one of the most popular types of specialty trousers in Western culture. Historic brands include Levi's, Lee, and Wrangler. 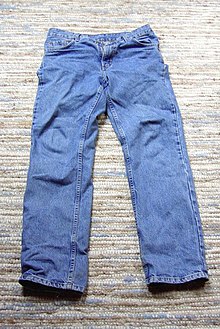 Jean fabric emerged in the cities of Genoa, Italy, and Nîmes, France. Gênes, the French word for Genoa, may be the origin of the word "jeans". In Nîmes, weavers tried to reproduce jean fabric but instead developed a similar twill fabric that became known as denim, "de Nîmes", meaning "from Nîmes". Genoa's jean fabric was a fustian textile of "medium quality and of reasonable cost", very similar to cotton corduroy for which Genoa was famous and was "used for work clothes in general". The Genoese navy equipped its sailors with jeans, as they needed a fabric which could be worn wet or dry. Nîmes's "denim" was coarser, considered higher quality, and was used "for over garments such as smocks or overalls". In 1576 a quantity of "jean fustians" arrived into the port of Barnstaple on a vessel from Bristol. Nearly all indigo, needed for dyeing, came from indigo bush plantations in India until the late 19th century. It was then replaced by indigo synthesis methods developed in Germany. 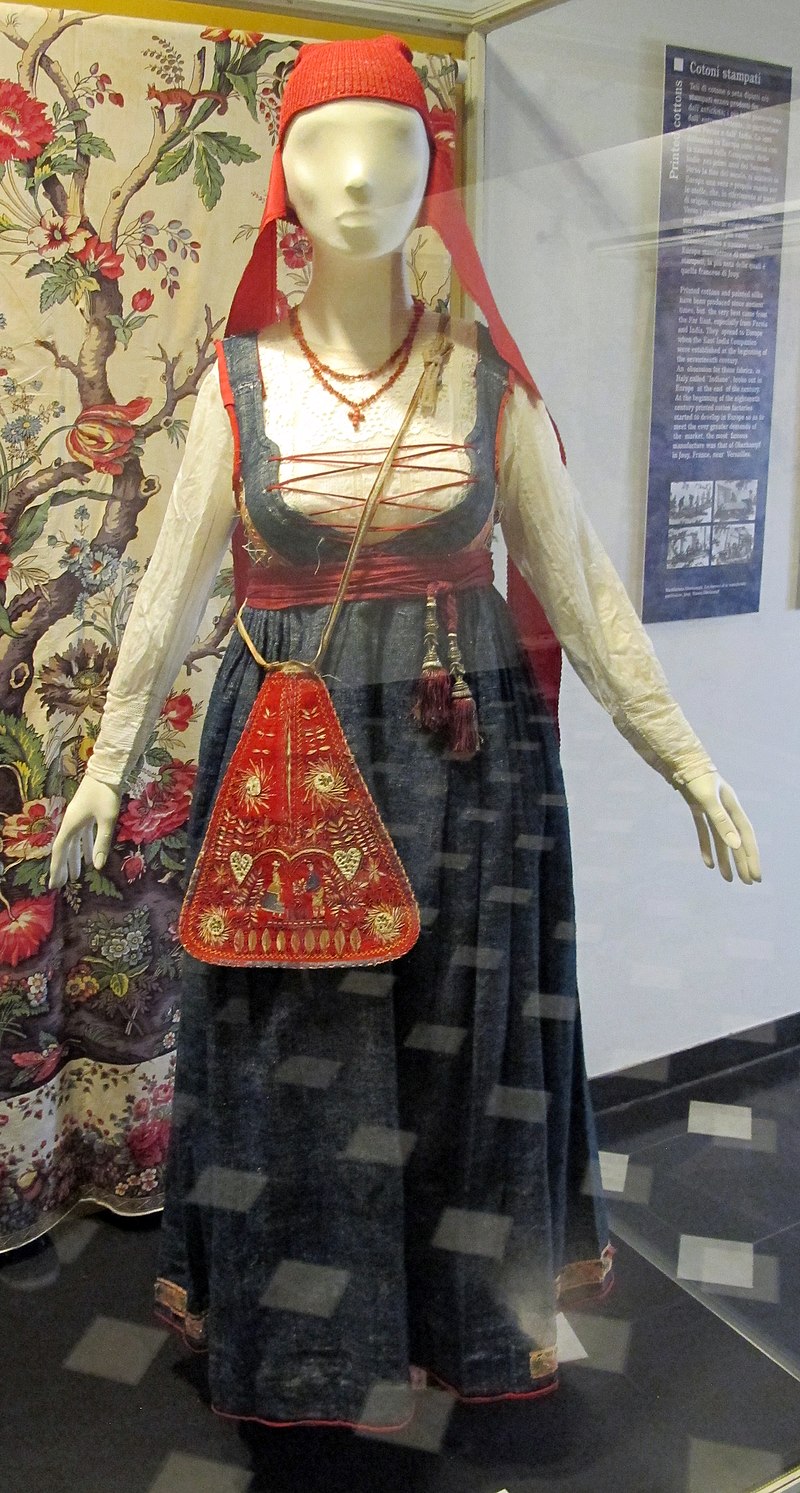 By the 17th century, jean was a crucial textile for working-class people in Northern Italy. This is seen in a series of genre paintings from around the 17th century attributed to an artist now nicknamed The Master of the Blue Jeans. The ten paintings depict impoverished scenes with lower-class figures wearing a fabric that looks like denim. The fabric would have been Genoese jean, which was cheaper. Genre painting came to prominence in late 16th century, and the non-nobility subject matter in all ten paintings places them among others that portray similar scenes.

Dungaree was mentioned for the first time in the 17th century, when it was referred to as cheap, coarse thick cotton cloth, often colored blue but sometimes white, worn by impoverished people in what was then a region of Bombay, India, a dockside village called Dongri. This cloth was "dungri" in Hindi. Dungri was exported to England and used for manufacturing of cheap, robust working clothes. In English, the word "dungri" became pronounced as "dungaree".

The term "jeans" appears first in 1795, when a Swiss banker by the name Jean-Gabriel Eynard and his brother Jacques went to Genoa, and both were soon heading a flourishing commercial concern. In 1800, Massena's troops entered the town and Jean-Gabriel was entrusted with their supply. In particular he furnished them with uniforms cut from blue cloth called "bleu de Genes" whence later derives the famous garment known worldwide as "blue jeans".

Levi Strauss, as a young man in 1851, went from Germany to New York to join his older brothers to run a goods store. In 1853, he moved to San Francisco to open his own dry goods business. Jacob Davis was a tailor who often bought bolts of cloth from the Levi Strauss & Co. wholesale house. In 1872, Davis wrote to Strauss asking to partner with him to patent and sell clothing reinforced with rivets. The copper rivets were to reinforce the points of stress, such as pocket corners and at the bottom of the button fly. Strauss accepted Davis's offer, and the two men received US patent No. 139,121 for an "Improvement in Fastening Pocket-Openings" on May 20, 1873.

Davis and Strauss experimented with different fabrics. An early attempt was brown cotton duck, a bottom-weight fabric. Finding denim a more suitable material for work-pants, they began using it to manufacture their riveted pants. The denim used was produced by an American manufacturer. Popular legend incorrectly states that it was imported from Nimes, France. A popular myth is that Strauss initially sold brown canvas pants to miners, later dyed them blue, turned to using denim, and only after Davis wrote to him, added rivets.

Initially, Strauss's jeans were simply sturdy trousers worn by factory workers, miners, farmers, and cattlemen throughout the North American West. During this period, men's jeans had the fly down the front, whereas women's jeans had the fly down the left side.[18] When Levi Strauss & Co. patented the modern, mass-produced prototype in the year 1873, there were two pockets in the front and one on the back right with copper rivets. The small riveted watch pocket was first added by Levi Strauss to their jeans in the late 1870s.

In 1901 Levi Strauss added the back left pocket to their 501 model. This created the now familiar and industry standard five pocket configuration with two large pockets and small watch pocket in front with two pockets on the rear.

Fewer jeans were made during World War II, but 'waist overalls' were introduced to the world by US soldiers, who sometimes wore them off duty. By the 1960s, both men's and women's jeans had the zipper down the front. Historic photographs indicate that in the decades before they became a staple of fashion, jeans generally fit quite loosely, much like a pair of bib overalls without the bib. Indeed, until 1960, Levi Strauss called its flagship product "waist overalls" rather than "jeans".

After James Dean popularized them in the movie Rebel Without a Cause, wearing jeans became a symbol of youth rebellion during the 1950s. During the 1960s, the wearing of jeans became more acceptable, and by the 1970s it had become general fashion in the United States for casual wear. In Japan in 1977, a professor at Osaka University, Philip Karl Pehda, chastised a female student wearing jeans in the classroom. Then he was protested by the students, and a controversy arose in the country.

Examples of intentional denim distressing strictly to make them more fashionable can be seen as early as 1935 in Vogue's June issue. Michael Belluomo, editor of Sportswear International Magazine, Oct/Nov 1987, p. 45, wrote that in 1965, Limbo, a boutique in the New York East Village, was "the first retailer to wash a new pair of jeans to get a used, worn effect, and the idea became a hit." He continued, "[Limbo] hired East Village artists to embellish the jeans with patches, decals, and other touches, and sold them for $200." In the early 1980s the denim industry introduced the stone-washing technique developed by GWG also known as "Great Western Garment Co." Donald Freeland of Edmonton, Alberta pioneered the method, which helped to bring denim to a larger and more versatile market. Acceptance of jeans continued through the 1980s and 1990s. Originally a utilitarian garment, jeans became a common fashion choice in the second half of the 20th century.

Traditionally, jeans were dyed to a blue color using natural indigo dye. Most denim is now dyed using synthetic indigo. Approximately 20 thousand tons of indigo are produced annually for this purpose, though only a few grams of the dye are required for each pair. For other colors of denim, other dyes must be used. Currently, jeans are produced in any color that can be achieved with cotton. 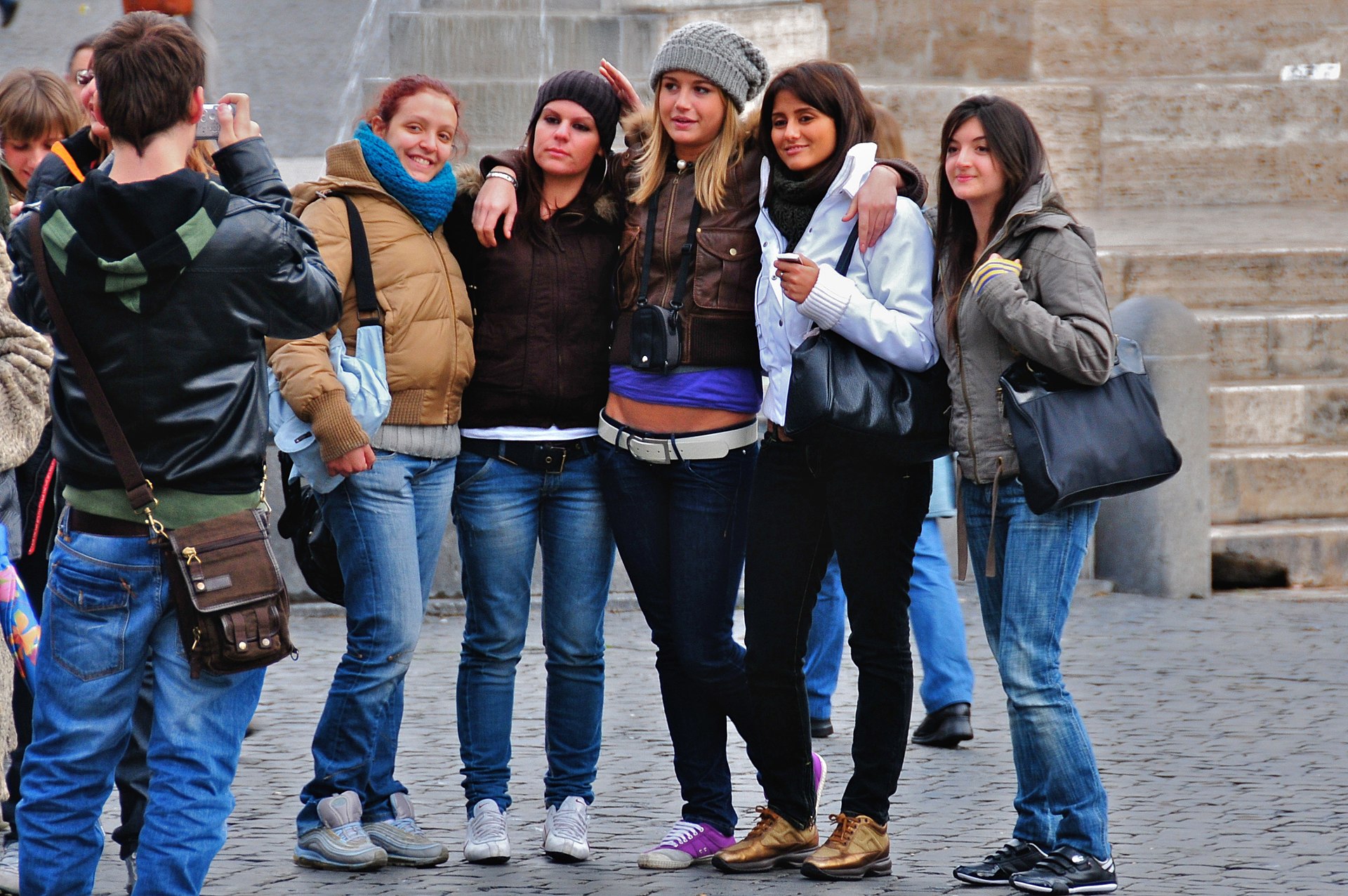 In 1962, Levi Strauss introduced their own pre-shrunk jeans (Lee and Wrangler jeans had already long been pre-shrunk); these did not shrink further after purchase, allowing the consumer to purchase a correctly-fitting size. Pre-shrink is most common in jeans nowadays. These jeans were known as the 505 regular fit jeans. The 505s are almost identical to the 501s with the exception of the button-fly. The Levi's Corporation also introduced a slim boot-cut fit known as 517 and 527. The difference between the two is that the 517s sit at the waist line and the 527s sit below the waist line. Later, Levi's would develop other styles and fits such as the loose, slim, comfort, relaxed, skinny, and a regular fit with a tapered leg. 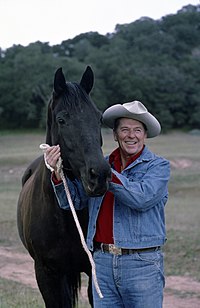 The used or "acid wash" look is created by means of abrading the jeans or treating them with chemicals, such as acryl resin, phenol, a hypochlorite, potassium permanganate, caustic soda, acids etc.

Ripping or distressing of jeans, though also arising naturally as a result of wear and tear, is sometimes deliberately performed by suppliers—with distressed clothing sometimes selling for more than a non-distressed pair. For example, Pucci once sold "embellished mid-rise boyfriend jeans" for £600 (US$860). 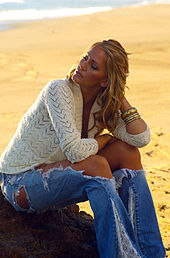 Sandblasting or abrading with sandpaper

Consumers wanting jeans that appear worn can buy jeans that have been specially treated. To give the fabrics the worn look, sandblasting done with chemicals or by adding pumice stone to the washing process or abrading with sandpaper is often done.

A typical pair of blue jeans uses 919 gallons of water during its life cycle. This includes the water to irrigate the cotton crop, manufacture the jeans, and the numerous washes by the consumer.

The production of jeans with a "used look" can be more environmentally damaging than regular jeans, depending on how the waste compounds are processed. Sandblasting and treating with sandpaper has the risk of causing silicosis to the workers, and in Turkey, more than 5,000 textile workers have been stricken with this disease, and 46 people are known to have died. Some companies have announced they are banning the use of sandblasting.