So, you decided to make the transition from beer bottles to glasses. Maybe this choice was made because you want to expand on your barware collection, or maybe it’s because you’re ready to experience the best ale like never before. Whatever the motivation, the ability to differentiate between drinkware is important if you want to get the most out of your hops. Whether you're a brew expert or casual drinker, our beer glassware guide provides you with the top beer glass types—some common, others not, but all a worthy addition to your home bar.

A brief history of beer glasses

As long as there’s been beer, there’s been a vessel to drink it. The earliest cups made from stone, wood and even leather date back to around 9,000 B.C. Glass beer vessels can be traced back to Roman times, and in the Middle Ages, artisans expanded the beer vessel repertoire to include enameled glass beakers, stoneware tankards and the lidded stein. Pewter ruled the day in the 1800s. As glassmaking and beermaking techniques improved, glass became the preferred material to showcase clearer and more aromatic brews.

Why drink from a beer glass?

Beer enthusiasts agree: if you want the full beer-drinking experience, it’s best to own a glass or two for different types of beer styles. Why? The answer is right in front of you...your nose. Connoisseurs know that using your sense of smell while enjoying this adult beverage enhances the flavor—a missed opportunity when sipping from store-bought packaging. Engaging your sense of sight is also noted as a reason to invest in beer glasses. Being able to see the liquid’s color and clarity, as well as bubbles and foam, adds to your experience. Not sure if beer is your thing? Explore our guide for types of cocktail glasses to find the best glass for you.

Probably the most common beer glass, the pint glass is the top choice for most restaurants and bars. This versatile glass complements most types of beer, from ales and stouts to IPAs and lagers. Pint glasses vary slightly from country to country, with American, English, Irish and German pints ranging in shape and size. The two most popular pint glasses are the American and English.

The American pint glass (also known as a “Shaker glass”) holds 16 ounces, and is tapered with straight sides—creating a simple yet cylindrical glass that’s wide at the base and narrows toward the top.

The English pint glass (also known as an “Imperial glass”) holds 20 ounces and has an appearance similar to its American counterpart—the only difference being a subtle lip at the rim.

Whatever your preference, the basic design of a pint glass makes it the best choice when throwing back a few with friends or enjoying a craft beer with dinner. What’s even better: they’re easy to clean and store. 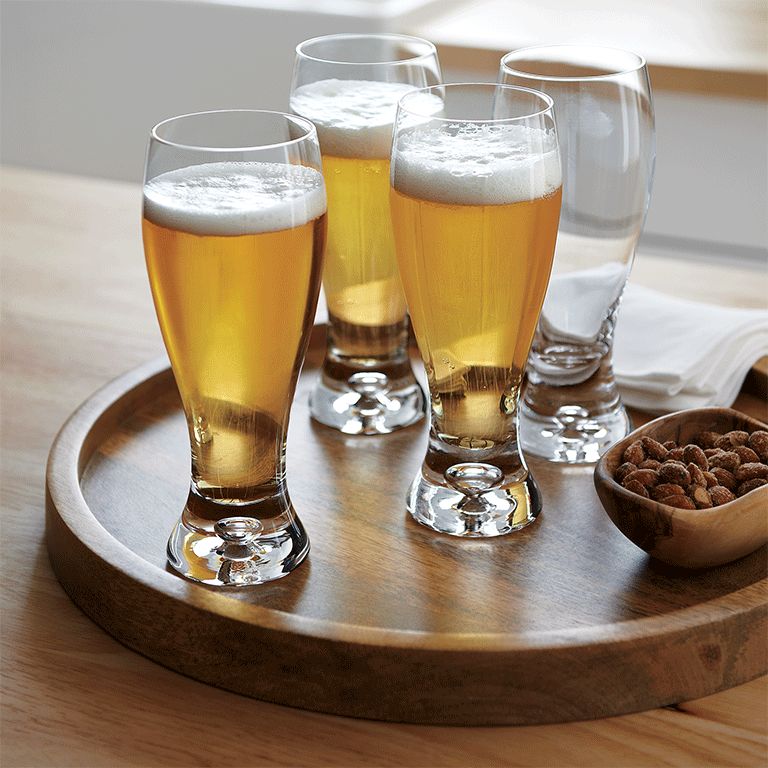 While primarily designed for Pilsner beers (hence the name), this type of beer glass is also compatible with lighter beers such as lagers and blonde ales.

Quite popular amongst Americans and Europeans, Pilsner glasses are made of a thinner glass and tend to have an elongated shape. The silhouette is generally slender and tapered, with some exhibiting a slight curvature and others completely straight.

The height of a Pilsner glass is also noteworthy, as it’s meant to showcase the liquid’s golden hue, clarity and carbonation. The slim frame also enhances bubbles. Similar to a champagne glass, the narrow base lets bubbles rise to the top, while the wider mouth allows for a foamy head that brings out the beer’s true flavors and aroma.

It’s also important to note that Pilsner glasses hold slightly less than pint glasses, with a capacity that generally tops out at 14 ounces. 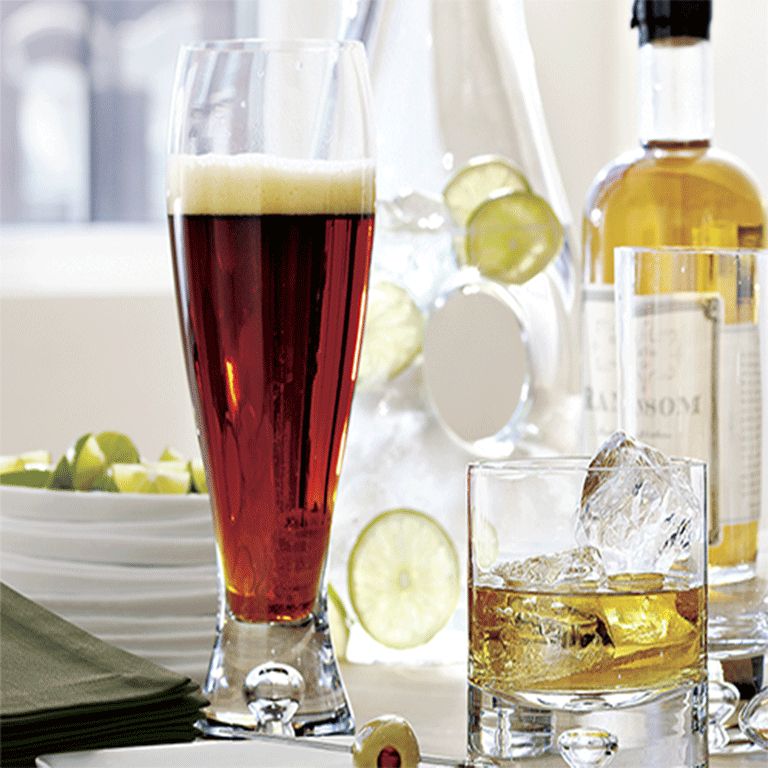 Meaning “wheat” in German, weizen glasses are often confused with pint glasses. Taller than pints, weizen glasses make more of a display of beer’s golden hue, while its curved profile traps sediment and yeast at the bottom. It also has a wider mouth to promote a foamy head and capture the beer’s aroma.

As the name implies, this type of beer glass is typically used for serving wheat beers as well as gose and white ale.

The thin glass construction makes it easy to add a garnish to the rim, although beer experts warn against using fruits with high acidity, as they can ruin the head.

Weizen glasses often have a capacity of 17 ounces, or half a liter. 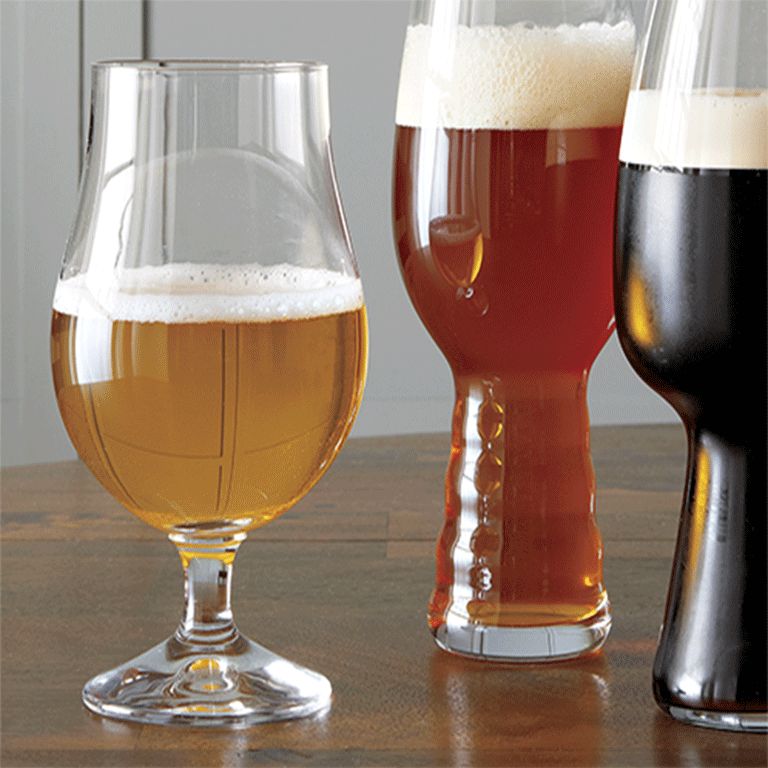 Also known as a Belgian glass, the tulip glass loosely resembles a goblet or snifter. Featuring a rounded bowl on a small stem, the glass tapers at the top to capture the beer’s aroma. The rim curves outward to provide for a foamy head.

Tulip glasses are best suited for strong beers that have ample hop, including double stouts, saisons, Belgian beers and other ales.

For a different take, try a thistle glass. It resembles a stretched-out version of the tulip glass, and has less curvature at the lip. Forego hoppy beers when using this glass, opting for Scottish ales, double IPAs and barleywines instead.

No matter what your preference, the wide bowl on both the tulip and thistle glass makes it easy to swirl the contents and release the aroma. 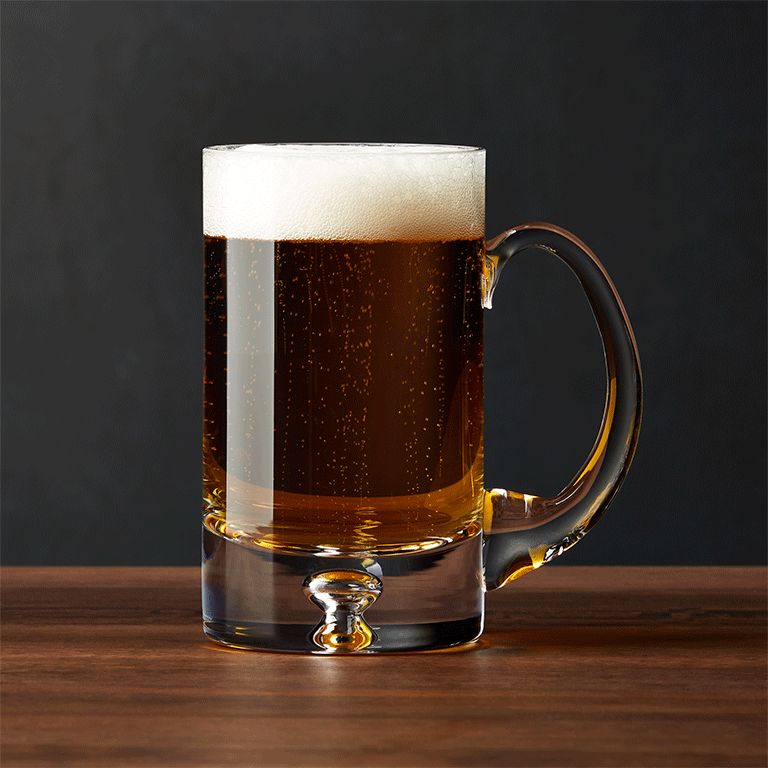 Is your main concern keeping your drink cold? This type of beer glass is your best bet. Strong and sturdy, the beer mug evolved from the traditional German beer stein and is well-suited for a wide range of beer types.

Thanks to its handle and thick glass, which provides ample insulation, the warmth from your hand won’t transfer to your beverage, keeping it ice cold for an extended period of time. An added benefit: your firm grip on the handle allows for robust toasting and cheering.

Beer mugs are also a favorite among enthusiasts who like to keep one in the freezer, which gives in a frosted effect and keeps beer tasting extra crisp.

Mugs are most popular in England, Germany and the United States and come in a range of sizes. 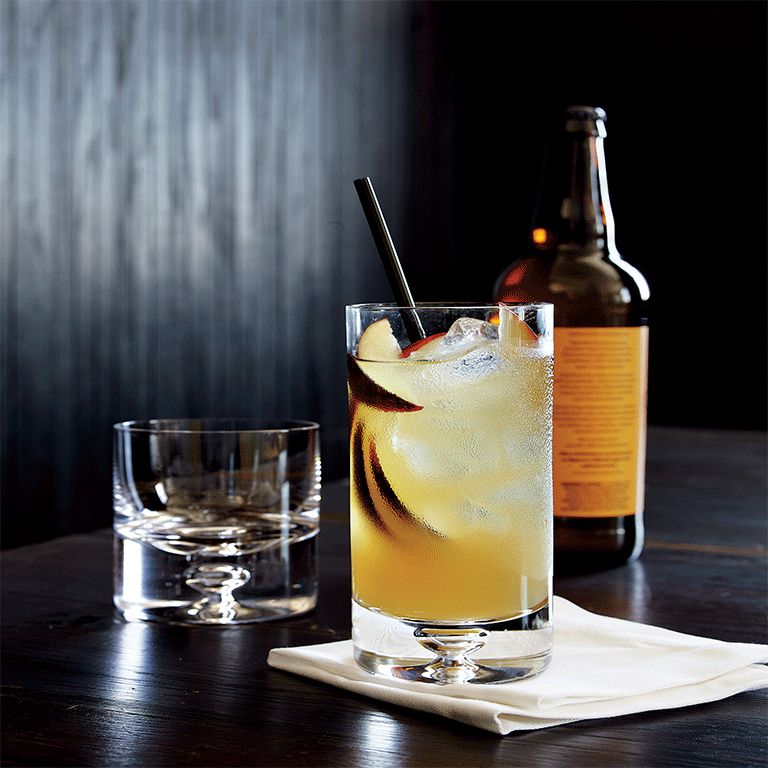 Perhaps the simplest type of beer glass to describe is a rye glass, or “stange glass” as it’s more commonly known. As with other beer glasses that are aptly named, this tall and slender glass is named after the German word for “pole.” Similar to the straight-up-and-down Tom Collins glass, the rye glass functions like a champagne flute, intensifying flavors and preserving bubbles.

A rye glass is recommended for delicate beers, such as kolsh or bock, as the glass would otherwise complicate the flavors of stronger ales.

Not only do rye glasses elevate your drink’s concentration, they also minimize heat transfer and fizz loss. Generally, they have a capacity of 6.5 ounces, but can also be found in larger sizes. 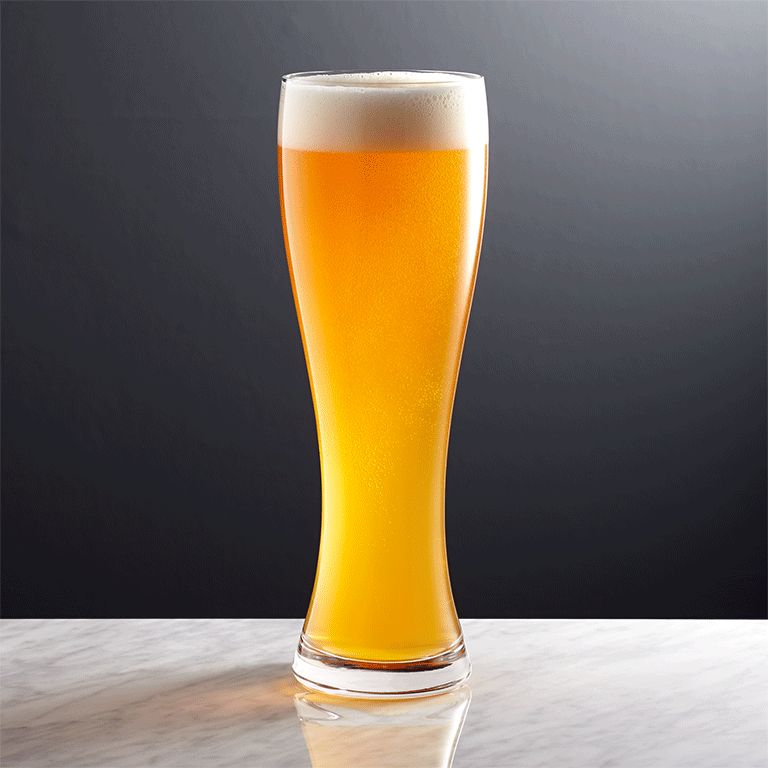 Looking for another option when consuming delicate beers? Consider a blonde beer glass. Also known as a Willi Becher glass, this vessel has a narrow silhouette to kick up flavor by enhancing the drink’s concentration.

Inspired by classic German drinkware, this type of beer glass also makes a reasonable substitute for everyday brews. Being tall and sturdy with a thick base and subtle tapering toward the top, the glass is easy to hold and makes a wonderful addition to the home bar. 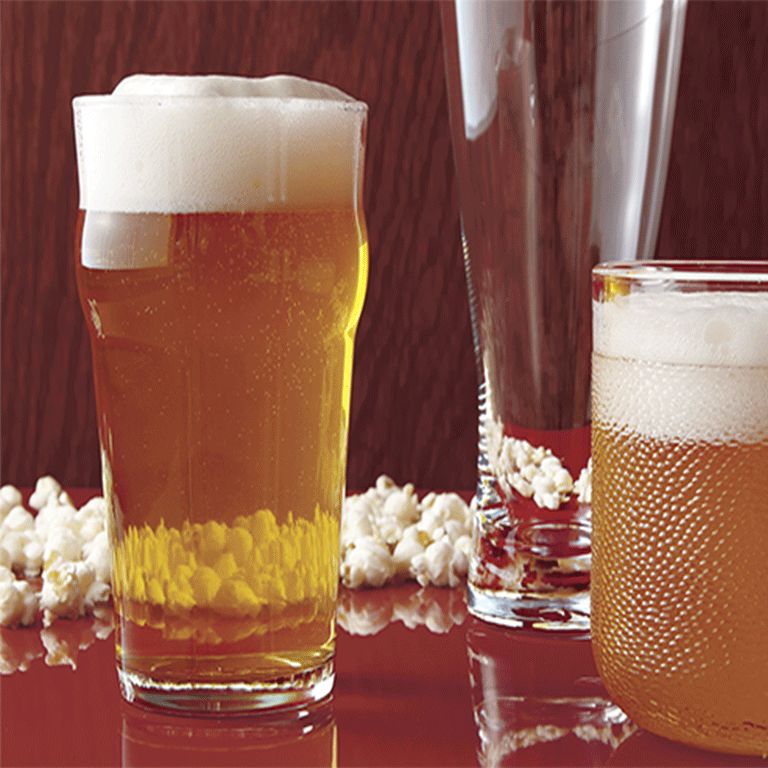 Also known as a nonic pint glass, the ale glass bears a strong resemblance to the American pint glass. The only difference is that this variety has a bulge about two inches below the mouth.

This pronounced curvature isn’t just for decoration, it also performs a number of functions, including protecting the rim from being chipped, providing a firmer grip and making it easy to stack after cleaning.

Ale glasses are best suited for IPAs, stouts and, as the name implies, ales. 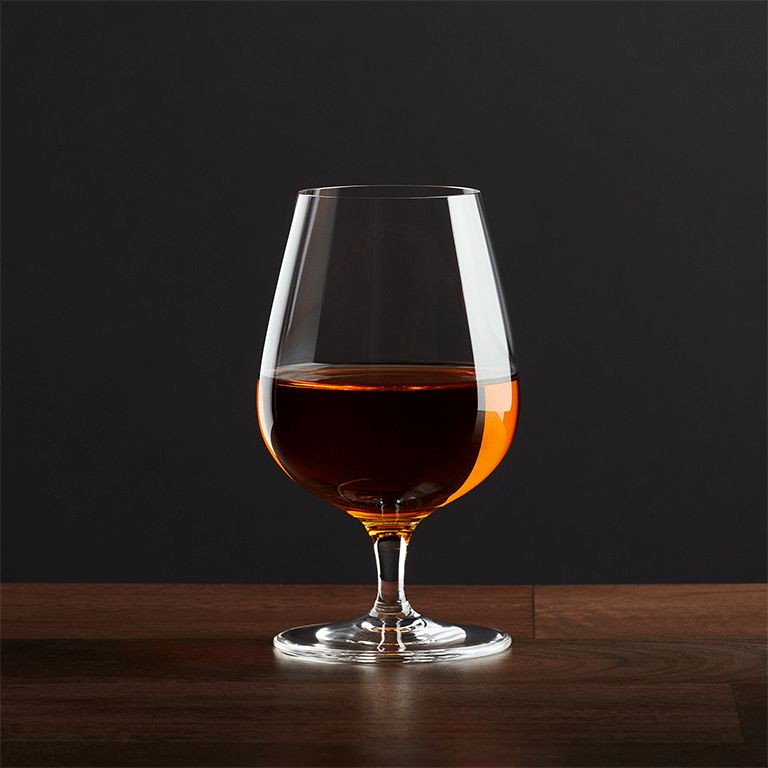 Already popular among brandy and cognac drinkers, snifters are quickly working their way into the hearts of beer lovers.

Snifters, similar to cordial glasses, feature a large bowl that sits on a footed stem. The size of the glass makes it easy to swirl the contents, resulting in better aromatics while consuming the drink. Most beer enthusiasts discourage filling it up all the way to the rim, however, as this inhibits taste and fragrance.

Typically, snifters are used with stronger beers, such as double and imperial IPAs as well as Belgian IPAs. 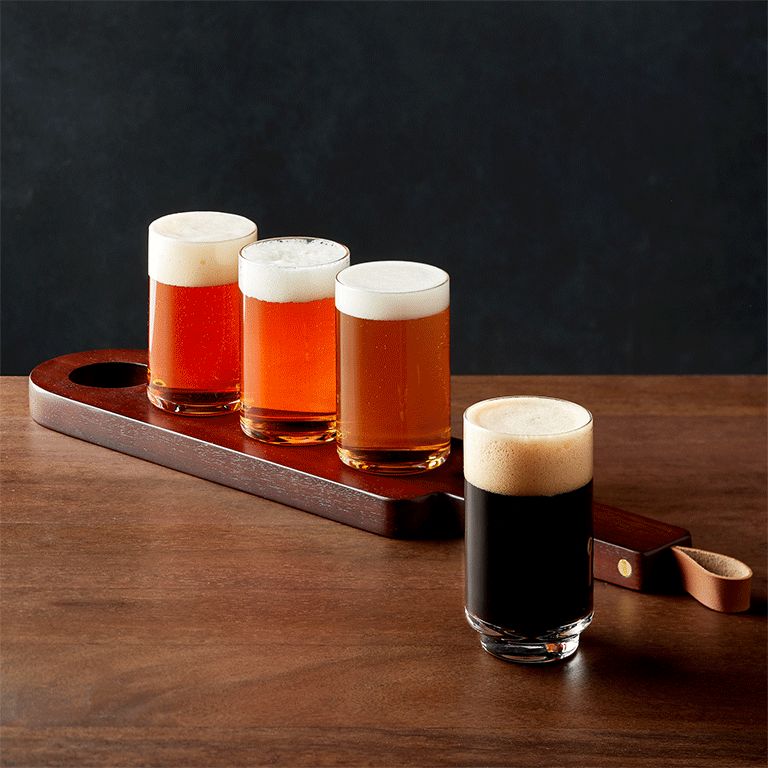 Also known as a sampler glass, tasting glasses come in all shapes and sizes. You’re likely to see these at a brewery tour or serving a beer flight at a bar.

Most tasting glasses only hold a fraction of the amount that pint glasses do (2.5 to 6 ounces). This petite pouring allows you to sample a variety of beers simultaneously, whether partaking of a beer sampler or trying out a few sips before making your order. Some beer connoisseurs also use tasting glasses as a way to enjoy more expensive brews. What's more: pair your new tasting glass with your top picks for wine and cheese tasting essentials. 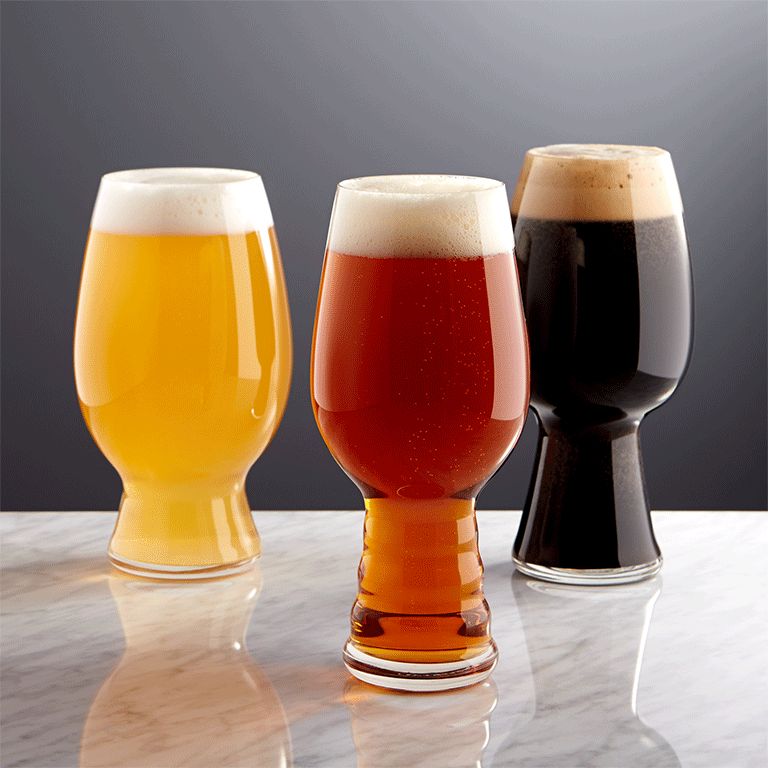 The most recent addition to many glass barware set collections in the U.S. is the IPA glass. First becoming popular round 2013, this specialized beer glass is ideal for aerating hoppy varieties.

Resembling an elongated goblet, IPA glasses feature a series of ridges toward the base. They work to agitate the beer, releasing aromas and flavor, which are then locked in by the rounded mouth. Some also feature etching on bottom that is meant to release carbonation and encourage bubbles to rise to the top.

The typical IPA glass has a capacity of 19 ounces. 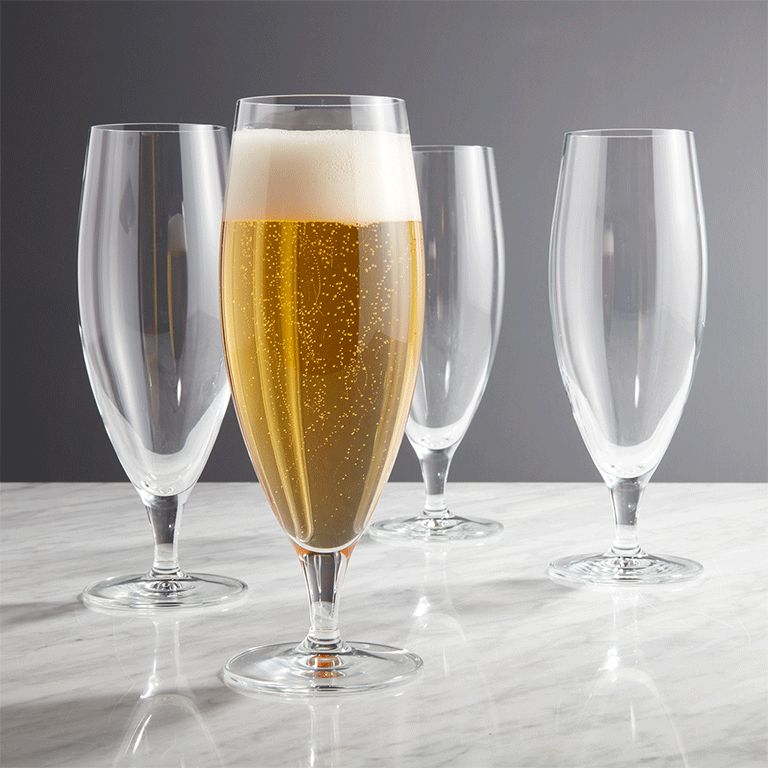 Goblets and chalices come in all shapes and sizes.

Goblets are often viewed as the most extravagant way to enjoy a beer. Traditionally, they feature a long and thick stem that makes a seamless transition into the wide bowl.

The term “chalice” is often used interchangeably with goblet, however, chalices are a distinct type of beer glass that has thicker walls and weighs more.

Either way, each has a wide mouth that encourages big gulps by directing beer to the back of the tongue, where the taste buds that detect bitterness lie. Both goblets and chalices are ideal for consuming heavy malt beers, including Belgian ales and German bocks.

Some goblets even feature a decorative gold or silver inlay. 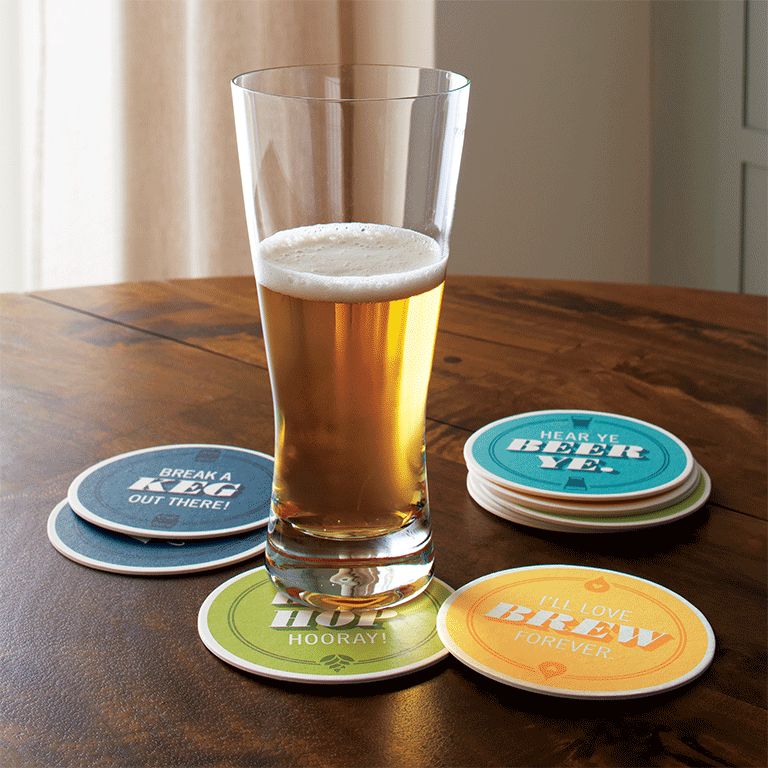 Identifying one specific glass to enjoy lager is a bit of a challenge, as lagers can vary widely. First, find a glass that locks in carbonation. Not only does this allow bubbles to float to the top, it also helps release the brew’s fragrance. Second, look for a glass that maintains the beer’s foam head—a must for getting the most out of your lager. And third, make sure the glass is tall and slender, giving you the perfect view of the contents and its color.