A Brief History of Sunglasses

Since prehistoric times until the spread of contemporary UV-shielding spectacles, Inuit people made and wore Snow goggles of flattened walrus or caribou ivory with narrow slits to look through to block almost all of the harmful reflected rays of the sun. In many different forms and with many different materials, the indigenous peoples of North America and northern Asia crafted efficient equipment to protect their eyes against the damaging effects of strong sunlight in icy circumstances.

It is said that the Roman emperor Nero liked to watch gladiator fights using cut emeralds. These, however, appear to have worked more like mirrors.

The first sunglasses, made from flat panes of smoky quartz called Ai Tai, meaning ‘dark clouds', which offered no corrective powers but did protect the eyes from glare, were used in China in the 12th century or possibly earlier. Documents describe the use of such crystal sunglasses by judges in ancient Chinese courts to conceal their facial expressions while questioning witnesses.

In 1459 Nuno Fernandes made a request for a pair of spectacles to protect his eyes while horse-riding in the snow against the glare coming from the snow, though no description of any actual spectacles is given.

By the 18th century, tainted mirror-like framed Murano glasses had been used as so-called 'gondola glasses' (vetri da gondola and also da dama) by Venician women and children, to shield their eyes from the glare from the water in the canals. The Doge and other well-off Venecians such as possibly Goldoni sported in the later 18th century so-called 'goldoni glasses', tainted pairs of spectacles with pieces of cloth as sun guards on the sides of the glasses

James Ayscough began experimenting with tinted lenses in spectacles around 1752. Ayscough was steadfast in the belief that blue-or green-tinted glass could potentially correct specific vision impairments. Protection from the sun's rays was not a concern at this time. 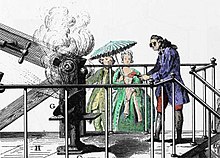 One of the earliest surviving depictions of a person wearing sunglasses is of the scientist Antoine Lavoisier in 1772 who worked with amplified sunlight. By the 19th century tainted spectacles were worn by railway travelers.

Glasses tinted with yellow-amber and brown were also a commonly-prescribed item for people with syphilis in the 19th and early 20th century because one of the symptoms of the disease was sensitivity to light.

From the later 19th century short references of sunglasses have been found in reports, such as by a Walter Alden in 1866, who wrote of soldiers using during the American Civil War 'shell spectacles' (verres de cocquille) to protect against sunlight on long marches, or by the British T. Longmore reporting in The Optical Manual (1885) of soldiers in Egypt being equipped with tinted glass 'eye protectors'. By 1895 sunglasses were mentioned in advertisements, such as in The Sioux City Journal (on June 13).

Jean-Marie-Théodore Fieuzal (1836-1888) was the first to argue for UV protection with (yellow) shaded glasses and, by 1899, Rodenstock GmbH produced possibly the first sunglasses intended for shielding eyes from UV light and not just glare. In 1913, Crookes lenses were introduced, made from glass containing cerium, which completely blocked ultraviolet light. In the early 1920s, the use of sunglasses started to become more widespread, especially among movie stars.

Inexpensive mass-production of sunglasses started in 1929 when Sam Foster introduced them to America. Foster sold his sunglasses on the beaches of Atlantic City, New Jersey under the name Foster Grant from a Woolworth on the Boardwalk. These sunglasses were made to protect people's eyes from the sun's rays.

By 1938, Life magazine wrote of how sunglasses were a "new fad for wear on city streets ... a favorite affectation of thousands of women all over the U.S." It stated that 20 million sunglasses were sold in the United States in 1937, but estimated that only about 25% of American wearers needed them to protect their eyes. At the same time, sunglasses started to be used as aids for pilots and even produced for the gaining aviation sector, eventually adding to sunglasses as cultural icons and to their popularity.

Sunglasses even played a significant role during the World War II, when Ray Ban created anti-glare aviator style sunglasses, using polarization. Ray-Ban Aviator sunglasses became popular with the celebrities and the community in 1937 when they started to be sold for the public.

Today, sunglasses with UV protection have almost become an industry standard, and there are a lot of tints available for sunglasses, and sunglasses styles are changing every year.

At present, Xiamen, China is the world's largest producer of sunglasses with its port exporting 120 million pairs each year.